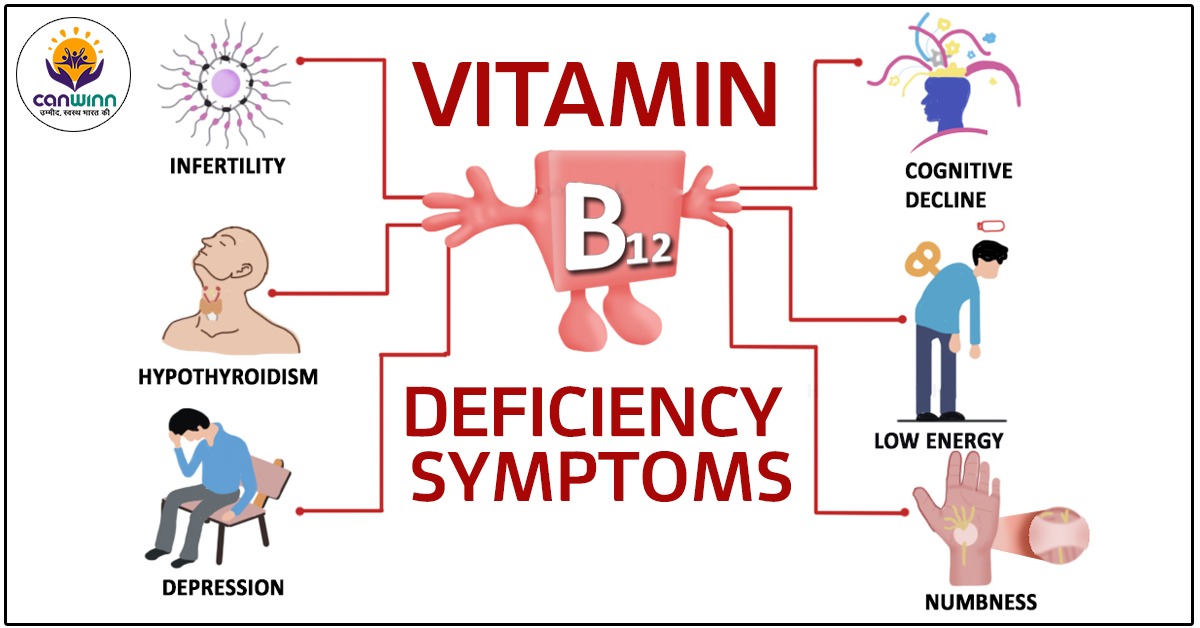 Vitamin B12 is a water-soluble vitamin that is essential for our health. This vitamin is also known as cobalamin. Do you know why it is important? Vitamin B12 supports the production of blood cells and DNA. In addition, it plays a vital role in the proper functioning of your nervous system.

When your body does not get a sufficient amount of vitamin B12, you might face both physical and psychological problems. Today, Canwinn Foundation will share vitamin b12 deficiency Symptoms that will make you aware to treat it on time.

Mainly, vitamin B12 can be naturally found in foods like:

In addition, vitamin B12 might be presented in fortified foods like plant-based milk like almond milk, soymilk, coconut milk, etc, and tuna, fortified cereal, and so on.

Who are at a higher risk of B12 deficiency?

Those who might face a vitamin b12 deficiency are:

One of the signs that you are a vitamin B12 deficient would be pale and slightly yellowish skin. As we have mentioned earlier Vitamin B12 plays a crucial role in Red blood cell production, the lack of B12 causes pale skin.

These are the common symptoms that occur when vitamin B12 deficiency disable your body to produce red blood cells. These cells transport oxygen throughout your body which does not properly function due to deficiency. As a result, you feel tired and weak.

Nerve damage is the serious symptom of vitamin B12 deficiency that grows with time. Vitamin B12 also plays a vital role in the metabolic pathway that produces fatty substance myelin.
Therefore, this substance protects and insulates by being surrounded by nerves.

When your body lacks vitamin B12, myelin does not get produced properly and as a result, your nervous system not able to function properly. Thus, your body senses the pins and needles that are alike prickling sensation.

Over time, if you left the nerve damage untreated, it can change the way you walk and move. In other words, nerve damage due to vitamin b12 deficiency can interfere with your balance and coordination.

Glossitis is the condition when your tongue gets inflamed. This condition makes your tongue change its color and shape. Therefore, it becomes painful, red, and swollen. According to the studies, if the tongue is inflamed and it has long straight lesions on it, this is considered to be an early sign of vitamin B12 deficiency. In some cases, B12 deficiency might cause oral symptoms like mouth ulcers.

Anemia, due to this vitamin’s deficiency can make you feel a bit dizzy and you might be facing difficulty in breathing.

Blurred vision can be a sign that your body is lacking vitamin B12. This situation occurs when the B12 deficiency left untreated for the long term. This leads to nervous system damage to the optic nerve that leads to your eyes.

Due to nerve damage, the signal that goes from your nerves to the brain gets interfered with. This is one of the b12 deficiency neurological symptoms that cause impaired vision.

In some cases of vitamin B12 deficiency, people might face mood swings. According to the studies, it has been found that some of the brain disorders like depression and dementia are associated with B12 deficiency.

Other treatments include Vitamin B12 rich diet if your deficiency is caused by a lack of the vitamin in your diet.

For more information on such kinds of deficiencies, stay connected with Canwinn Foundation!

Previous Story
How to detox the body naturally at home?
Next Story
Health Benefits of Lime

How to join Canwinn NGO, Gurgaon | get various benefits for Free in gurugram

First, let us introduce what Canwinn is? CANWINN is the...

In contrast to weight loss weight gaining is a really...

SearchPostsLogin
What are the topmost habits for health, beauty, and fitness of girls aged 16 to 25?
What are the best healthy and skinny body tips? How to Stay Fit Forever
What to eat in malaria? Healthy foods for consumption during illness
Fruits of the rainy season – Healthy diet for monsoon
Know more about Canwinn NGO Gurgaon, Haryana – We care About You
How does good nutrition affect health? Good nutrition for good health